What do you need to know about cloud data backup in Lodi?

Given that most SMBs are now cloud-first, if not cloud-native, it makes sense to back up to the cloud. Not only does this eliminate the need to take data offline just to put it back online again, but it also eliminates the need to transport and store physical media and it lays the foundations for an effective cloud disaster-recovery solution. With that in mind, here is what you need to know about cloud data backup in Lodi.

How To Work On Cloud Data Backup?

If you’re already working in the public cloud then, by definition, your data is (or should be) suitable for use in the public cloud. This means that the easiest and most cost-effective solution is usually to back up to another public cloud. There are, however, some practical challenges in this approach, many of which revolve around the fact that data will need to be encrypted in the first public cloud so that it can be transported across the public internet into the second.

A good cloud data backup partner will, however, be able to handle these for you and it can be well worth making the effort to do so because this approach could not only protect you against the erroneous deletion of your data (accidental or malicious) but also act as a proper data-recovery solution, giving you everything you need to get going again quickly if you lose access to your main public cloud.

2. If you’re working in the private cloud, you may still be able to back up to the public cloud

If you’re working in a private cloud, the situation can become a little more complicated. You can still back up to a public cloud because you have the option to encrypt your data on your own servers and keep it encrypted until it was either deleted or restored. In other words, it would only ever be in the clear in your own safe environment. 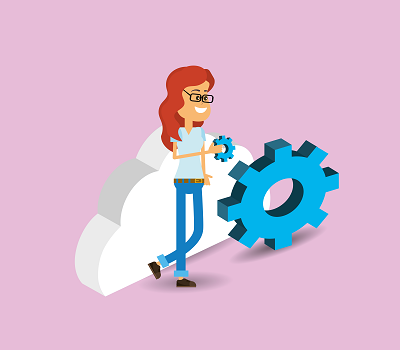 The issue here would be that you would presumably be unable to use the public cloud as a disaster-recovery solution, due to the sensitive nature of your data. Instead, you would have to set up a second private cloud with everything you needed except your data and have a process to import your data to it if/when necessary. You would also need a process to perform data backups from there back to your “recovery” cloud so that you could refresh your main cloud when it was restored.

This might well turn out to be the most cost-effective option but it may not be the most convenient and also it adds an extra link to a chain that slows down the speed and increases the chance of failure. The alternative is simply to set up another private cloud and use that for both data backups and disaster recovery.

3. If you’re working in a hybrid cloud you need to decide whether or not to split your data backups

If you’re running a hybrid cloud, then you’re going to need to take two sets of data backups in any case, one from your private cloud and one from your public cloud. You’re then going to need to think about where to store those data backups and, in particular, if you’re going to keep them in the same place or split them, typically over a public cloud and a private cloud, essentially mirroring your current set-up. You could then set each of them up as a disaster-recovery solution. Similar comments apply to multi-clouds and hybrid multi-clouds.

4. Cloud data backups must be partnered with solid archiving

Modern businesses generate lots of data. It isn’t just the quantity of information that is created, it’s also the way it’s being created. For example, in the old days, an in-house training course would probably have been delivered by a human and supported by paper handouts. These days, it’s more likely to be delivered online using rich media formats such as video. This has all kinds of benefits but does increase data-storage requirements and hence the cost of storing data.

What’s more, one of the most basic concepts of data protection is that you keep track of what you have and why you have it and only keep it for as long as you need it.

For both of these reasons, you need a solid process for identifying which data is being actively used and which is not and ensuring that the latter is either deleted or moved into an archive. The traditional means of archiving was on physical devices and there is still a case for this, but cloud archiving is becoming increasingly popular and is very cost-effective.