What you need to know about data backup in Sacramento

If you have data, then you need it backed up.  You may also need it archived.  The cloud can be used for either, but is most commonly used for data backups.  Here is a quick guide to what you need to know about data backup in Sacramento.

A data backup service simply takes a copy of your data “as is” as a precaution against loss or damage.  Data backups are “active” storage.  In other words, they may be called upon at any time.  A data archiving service, by contrast, will safeguard data you have made an active decision that you need to keep over the long term (often to ensure compliance with the law).  This data will typically be well organized and tagged so that it can be recovered easily if needed.  Archiving is generally passive storage, there is usually no great rush for archived data.

One of the first questions a company has to answer is whether they want their data backups to be onsite, offsite or both.  In principle, onsite backups offer both the highest level of convenience and the highest level of security (because the data does not need to travel offsite).  In practice, however, onsite backups require you not only to run the data backup process effectively, but also to secure the storage location effectively and this is not necessarily as easy as it might sound. 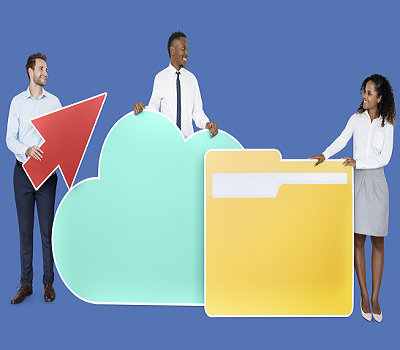 Not only do you have to secure a data backup storage location against obvious threats such as theft, fire and flood, you also have to think about environmental conditions, which could cause the data to degrade.  Admittedly this is more of an issue for data archiving, as the data is stored for longer, but it does still matter for data backups.

Using offsite data backups does mean that data has to travel, but it also means that you can put the data backups in the care of a specialist company, which will ensure that the data is kept in optimum condition.

The basics of cloud backups

When a company first implements a cloud backup system, the usual first step is to backup all existing data.  If the company is backing up to a public cloud, then this will generally entail the data being uploaded over a network connection, which can take a long time, even on the fastest possible link.  If, however, they are using a private cloud, then it may be possible to send a hard-copy of the data to the vendor for them to copy into their system.

After this initial “cloud seeding” process, the cloud vendor will arrange for backups to be performed according to the client’s requirements.  The designated data will be identified, collected, compressed, encrypted, transferred and stored until it is either needed or deleted (to make way for a new backup).

In principle, the best (meaning safest and most reliable) way to conduct a data backup is to backup all relevant data each time.  In practice, this is usually too much of a drag on resources, especially bandwidth and storage (plus they can be extremely time-consuming).  As a result, many companies will split the difference and run full backups interspersed with incremental or differential backups.

If you’re already operating in the cloud then you may be asking yourself firstly if you need to back up your data again and secondly whether backing up data in a cloud means that you have to go back to using the traditional, offline systems you thought has been long since superseded by the cloud.  The answer to the first question is “it depends” and the answer to the second question is “no”.

Only you can decide whether or not you want the extra security of backing up data which is already in the cloud.  If, however, you do decide that you want to the data to be backed up, then it is perfectly possible to undertake cloud-to-cloud backups so you avoid going back to “old-school” systems.